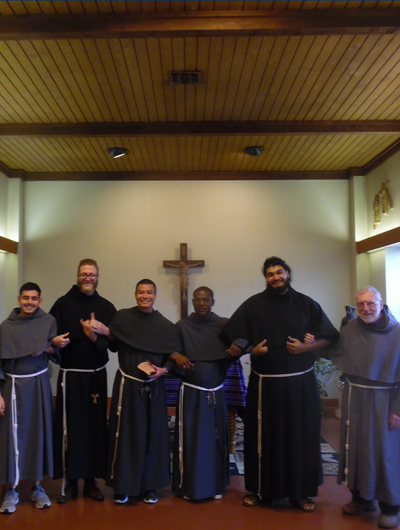 Not long ago, when we as a Province spoke of "interculturality" we were talking about the relationship between our Hispanic and our Anglo communities. Here in San Antonio at San Damiano Friary, beyond infusing the "Tex-Mex" culture into our daily life, we had one day a week where the language of the house was Spanish, and all prayer and interaction during the day was supposed to be in that language.

That’s no longer possible. Today in the house we have speakers of English, Spanish, Dutch, Vietnamese, Korean, and French-Creole. Most are members of US Provinces, but some are international students and will eventually return to their home Provinces. This has meant that our previous emphasis on Spanish, and the learning of Spanish, has been diminished. But our vision of our Order, and the world, has been greatly enhanced – and we have no desire to turn back the clock.

The Friars from around the world will take this broadened vision and international experience back to their home Provinces. The US Friars are made aware that there is a world beyond North America, and how it is important for them to learn from the Brothers they will be working with for the rest of their lives. Interestingly, the diversifying of language in the house has emphasized the need for language study and increased the self-motivation of our students to acquire a facility in language, particularly still in Spanish.

Whatever the challenges of globalization may be, it is a sacred fact that God calls all his children into a world of unity and love. We praise God for the opportunity to be a member of a brotherhood that, often counter to the current political winds, witnesses to that sacred fact. As willingly as we have sent our missionaries out into the wider world, we open our arms to welcome our international brothers to the United States!