Pope Francis at the moment of his election -

"At the election I had the archbishop emeritus of Sao Paulo next to me. He is also prefect emeritus of the Congregation for the Clergy, Cardinal Claudio Hummes OFM: a dear, dear friend. When things were getting a little 'dangerous,' he comforted me. And then, when the votes reached the two-thirds, there was the usual applause because the Pope had been elected. He hugged me and said: 'Do not forget the poor.'

"And that word stuck here [tapping his forehead]; the poor, the poor. Then, immediately in relation to the poor I thought of Francis of Assisi. Then I thought of war, while the voting continued, until all the votes [were counted]. And so the name came to my heart: Francis of Assisi. For me he is the man of poverty, the man of peace, the man who loves and safeguards Creation.
"In this moment when our relationship with Creation is not so good--right?--He is the man who gives us this spirit of peace, the poor man ... Oh, how I wish for a Church that is poor and for the poor!" March 16, 2013. 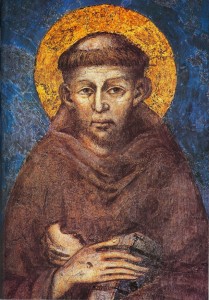